The Understanding Korea project is designed to help correct potentially misleading information about Korea in overseas textbooks and to encourage positive descriptions of the country instead. The project is not simply about improving textbook content on Korea. A nation’s competitiveness was traditionally determined by its hard power, but today it hinges on soft power elements such as culture, values, and human resources. With the growing importance of national image, which encompasses a country’s political, economic, and cultural values, governments around the world are working hard to promote positive images of their respective countries. Based on the belief that textbooks provide fundamental information about other countries and that young learners come to hold an image of a given country based on that information, this project aims to promote Korea’s image worldwide by disseminating accurate information about the nation, including its history, geography, and culture. The following is an overview of the programs provided by the AKS Understanding Korea Project Division targeting textbook experts around the world.

The International Textbooks Archive, the only one of its kind in South Korea, is closely related to library activities. Located in the Academy of Korean Studies, the archive houses 16,104 textbooks from 147 countries. As the only foreign textbook archive in South Korea, it makes its materials accessible to textbook researchers. 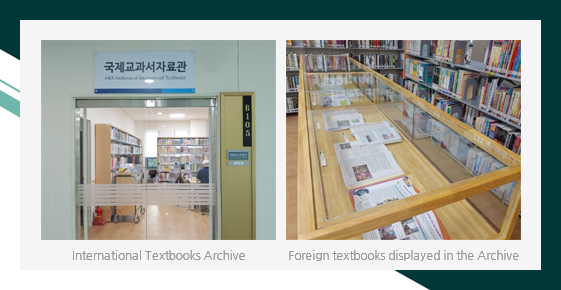 The AKS Understanding Korea Division examines Korea-related content in textbooks it collects other countries and engages in a range of activities to help improve content as needed. Its efforts are organized by country and region.

One of the main activities conducted with individual countries is the Korean Culture Workshop, which involves inviting to South Korea people in charge of textbooks at the local education ministry, textbook writers, and editors from related publishing companies. Through seminars, lectures, and visits to historically and culturally important sites in South Korea, the participants have a chance to further develop their knowledge and understanding of Korea. 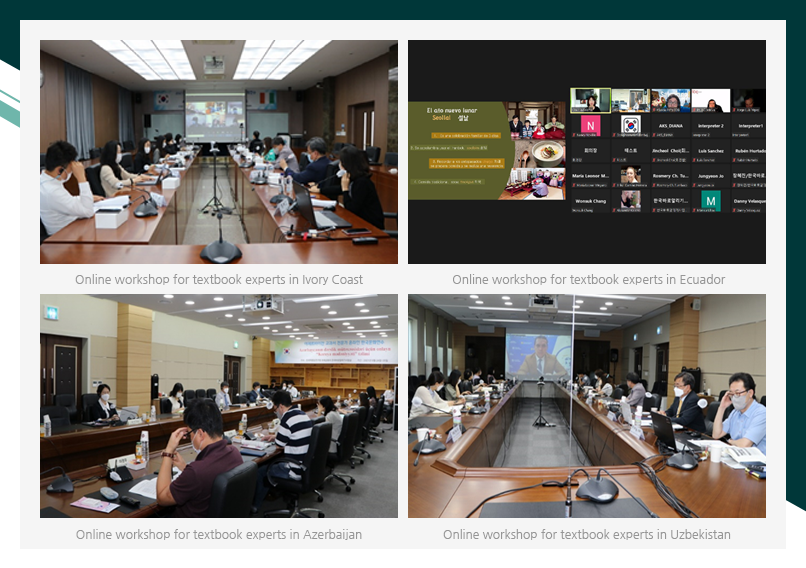 Once example of an activity conducted by region is the Glocal Education Cooperation Program. It is provided in the home areas of the target audiences with a goal to establish a cooperative education network on a regional scale and to promote information on Korea. Due to the Covid-19 pandemic, this program was held online both last year and this year. This year’s program, entitled “Teaching about Korea in North American Schools,” was provided to educators in North America. The program introduced methods of teaching about Korea that can be used in North American schools, including presentations on how to apply a comparison of King Sejong with Frederick II of Prussia in American secondary schools (James Feldman); development of Korean modules and teaching about Korea in Canadian schools (Jim Pedrech and Rachel Collishaw); and Asian and Korean literature in the post-colonial era with a focus on prominent translators and translations of Korean literature (Park Byung-guk).

The AKS partners with major textbook publishing institutions in China, Russia, and India to host regular seminars. The seminar on Chinese textbooks has been held since 2003 in partnership with People’s Education Press, the largest textbook publisher in China. In addition, the AKS holds an annual seminar with the Russian Academy of Education, an institution affiliated with the Russian Ministry of Education; and for India, it held a textbook and education cooperation workshop with the National Council of Education Research Training. 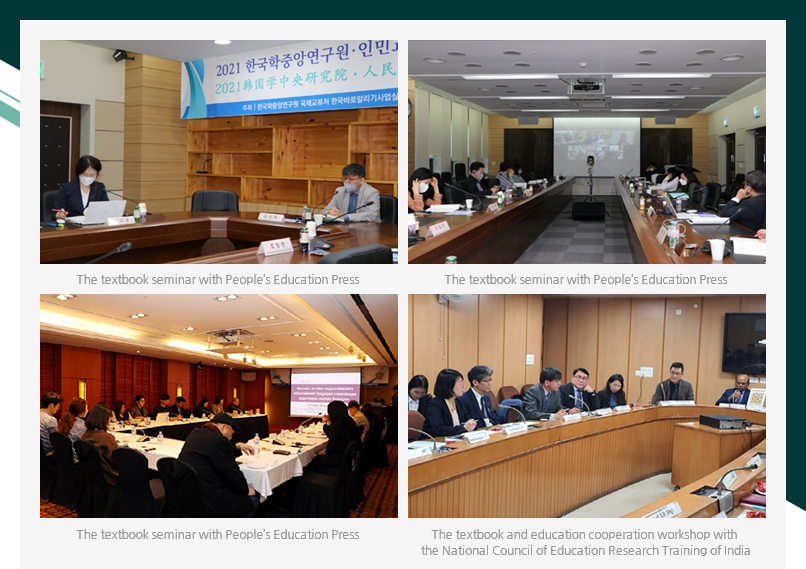 5) Development and dissemination of materials on Korea

The AKS Understanding Korea Project Division has developed and disseminated a range of materials on Korea in an effort to help improve the quality of content on Korea in overseas textbooks. These materials include items customized to the curriculum of the target country in order to offer information on the culture, history, politics, and economy of Korea; InfoKorea, a magazine that provides statistics and feature articles on Korea; and additional academic materials such as the Understanding Korea series made for Korean Studies scholars and researchers. Materials customized for target countries play an important role in diversifying textbook content on Korea. For example, textbook content that was typically limited to the Korean War and the ‘Asian Tigers’ phenomenon has been expanded to include Korea’s origin myth, culture, science and technology, and South Korea’s pandemic response. Thanks to the AKS’s efforts to provide materials customized to the needs of different countries, textbooks in Central and South American countries, which used to present considerably less information on Korea compared to on China and Southeast Asia, now include a wide range of subjects, such as the origin myth, folktales, computer games, technology, food, pandemic response, and movies. In Ecuador, for example, not only sociology and history textbooks but also those that are typically considered unrelated to content on Korea such as mathematics, physics, biology, natural science, language, and literature textbooks now feature content connected to Korea.

While the above-mentioned programs are designed for textbook experts, this essay contest targets non-Korean nationals and overseas Koreans. Interested individuals are asked to submit an essay on how to improve the image of South Korea by analyzing content on Korea in overseas textbooks or on websites or materials published by the AKS Understanding Korea Division. The feedback received through this contest is reflected back in our programs.

The positive influence of the Academy of Korean Studies

There are a number of contests hosted by history research institutes, private memorial institutions, and other research associations. The idea behind them is to provide participants with resources related to the topic of the contest through which they can work on a given assignment. These contests often offer special prizes along with the main prizes so that they can reward multiple outstanding participants. If institutions and associations in other disciplines modeled this example and provided participants with resources to study the Korean economy, society, and other areas, it might start a new form of the Korean Wave. 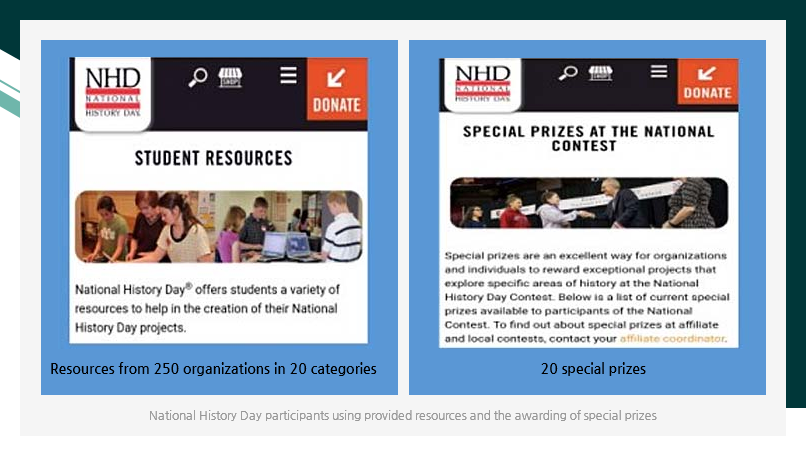 Similar to South Korea, Taiwan was forced to endure a long period of dictatorship. Since many Taiwanese received their education on the history of China under the dictatorship, they tend to be oblivious of how today’s democracy and freedom of press was achieved. South Korea has instituted a number of laws and memorial days to compensate the victims of its history and to remember tragic events, including the April 3 Jeju Massacre, the April 19 Revolution, and the sex slavery imposed under Japanese rule. While the Taiwanese suffered what they refer to as the February 28 Incident, the Formosa Incident, and sex slavery under Japanese rule, they lag behind South Korea in terms of establishing transitional justice. While both Taiwan and South Korea achieved their present democracy through popular resistance to authoritarian rulers, the history of the Taiwanese democracy movement is not well known.

As shown above, the Understanding Korea Project Division uses textbooks to conduct various activities that improve the image of Korea. Thanks to its efforts, Korea is no longer depicted in textbooks in other countries simply as the only divided country remaining on earth or as a developing country from the 1980s and 1990s. In order for Korea to overcome stereotypes and be properly recognized as a country with rich and distinct cultural resources, continued interest in and sustainable support for the Understanding Korea project is essential.