I became the first Korean Studies librarian at Princeton University in 2008. I am very proud of this fact since the inception of the position is as meaningful as the gravity of the responsibility given the 275 years of the university’s history and the 85 years of the university’s East Asia Library. However, this article is not about me but about a librarian who worked very hard about 80 years ago to create a Korean collection at Princeton University.

Although I am officially the first Korean Studies librarian at Princeton, there were several people, albeit under different titles, who spared no efforts to build a Korean Studies collection. As the only Korean staff managing Korean books, Chongsook Kim worked for many years managing Korean materials assisting the Japanese Studies librarian. Before her, Soowon Kim worked as the Japanese Studies librarian but felt a responsibility as a native Korean to collect Korean materials. Most significantly, I found in the university archives that there was a Korean who worked to create a Korean collection from scratch in the 1940s right after the East Asian Library had been established. This person, Dr. Kei Won Chung, also actively worked in the US in support of Korean independence. In South Korea, he is not known as a librarian but as a Princeton alumnus and a member of the second and third National Assemblies.

Although it is not difficult to find information on Chung thanks to his career in politics, the description of him in various sources can often be misleading. On Korean Wikipedia, for example, it says that “he graduated from Soongsil College in Pyongyang and studied theology at San Francisco State University” and that “He obtained a doctorate degree in Philosophy at Princeton University and served as a professor at his alma mater.” This brief description gets three things wrong: according to the Princeton University Archives, Chung graduated from San Francisco Theological Seminary, which is unrelated to San Francisco State University, and obtained a doctoral degree in Oriental Studies (Doctor of Philosophy) at Princeton University, but never served there as a professor. In addition, the fact that he worked in the university’s East Asian Library and was involved in the independence movement while studying in the US is not mentioned in any sources. 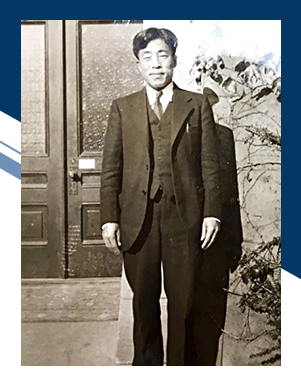 The University Archives provide some clues about his life at Princeton through student documents and letters from the then-head of the East Asian Library. According to the university’s student records, Kei Won Chung received a doctorate degree with a thesis entitled “The Origins of the Korean Alphabet.” He passed French and German language tests as a doctoral requirement. The courses that he took as part of his doctoral program suggest that he was good at languages. He took courses on Syriac and Arabic languages as well as introductory linguistics in his first year. In his second year, he studied Hebrew, basic Sanskrit, and Semitic languages; he studied ancient Sanskrit and Islamic culture in his last. His proficiency in languages and background in Asian culture probably contributed to his employment at the Gest Oriental Library, the predecessor of the East Asian Library.

The Gest Oriental Library was established based on some 100,000 Chinese books in 1936, which was named after the Gest Collection. Dr. Nancy Lee Swann, the first woman to receive a doctorate in Chinese Studies in the US, was the first curator of the collection. The fact that Kei Won Chung was hired to take charge of organizing old books written in East Asian languages other than Chinese, including Manchu, Mongolian, and Tibetan, was discovered in the letters that Swann sent to a number of people between 1938 and 1947. In one of these letters, she expressed concern about the cataloguing of materials in these languages after Chung left the library. It is clear from these letters that Chung competently managed the cataloguing of East Asian materials. Swann also reported to her supervisor that Chung visited UC Berkeley to examine its Asian collection and compile a list of materials needed in Princeton.

According to the letters by Swann, Chung also attempted to add a Korean collection to the Princeton library. Since there were relatively few Korean books at Princeton compared to the vast Chinese collection, Chung may have desired to build up a comparable Korean collection. It is also likely that he regretted the lack of Korean materials at the school as he was working on his doctorate degree. In the 1940s, Swann sent thank-you letters to Kilsoo Haan (1900-1976), who lobbied the US Congress and government in support of the independence of Korea, for the Korean books he had donated through Kei Won Chung and to Dora Yun for donating money to purchase Korean books. It is highly likely that Chung served as a bridge between Swann and these two donors. There are also several notes on the titles of donated books and the amount of donations.

Chung seems to have held an ambitious dream of compiling a Korean collection. In March 1941, Swann sent a letter to Harry S. Kim (Hyung-soon Kim) and his wife, who were successful entrepreneurs with orchards in California and active supporters of the Korean independence movement. In this letter, Swann mentioned the possible donation of 100,000 books, which had been under discussion with the couple through Chung. In the same year, Franklin Aydelotte, then the Director of the Institute of Advanced Study at Princeton, sent a letter to Chung and expressed his encouragement regarding the donation deal with Harry S. Kim. This donation, if accomplished, would have created a Korean collection comparable to the Gest Collection. It seems that they were able to secure the budget through Harry S. Kim but had difficulty bringing in such a large number of Korean books into the US, as both countries were deeply caught up in the events leading up to the entry of the US into the Second World War. Having failed to find a way to bring in books directly from Korea, Swann sent a letter to the Smithsonian Institution in June of the same year seeking advice on how to safely receive a large quantity of books from Korea. The Smithsonian Institution also did not know how to accomplish the task, but referred her to a librarian at the Imperial Library of the Empire of Japan (now the National Diet Library). Swann immediately wrote to the librarian and asked if help could be arranged to allow Chung to receive books from Korea. A month later, Swann received a reply from the Japanese library informing her that the librarian had retired and the person now in charge was Okada Narau (the third Director of the Imperial Library). Two months later, Swann sent a letter to Okada for help, but no further correspondence between them is found in the University Archives. So ended the discussion of the donation of 100,000 Korean books. Two months later, Japanese forces attacked Pearl Harbor. Even if the Japanese library had sent a positive reply, it probably would not have reached US soil, and they would not have been able to help Swann. Chung’s audacious dream of creating a Korean collection comparable to the Gest Collection failed with the spread of the war.

With the US entry into the Pacific War, Swann’s letters turned to a different direction. Her letters indicate Chung's involvement in the independence movement and his recruitment by the OSS (later renamed the CIA), which hoped to apply his linguistic ability to the US war effort. Right after the Japanese attack on Pearl Harbor, the Korean Students Association in the US, of which Chung was an active member, sent a letter to President Roosevelt describing the illegitimacy of Japan’s annexation of Korea and requesting the US government to allow foreign students to join the US military so that they could fight against Japan in support of the independence of Korea. Chung translated this letter into English, which is how the Princeton Archives obtained the original letter and a copy of the translation. 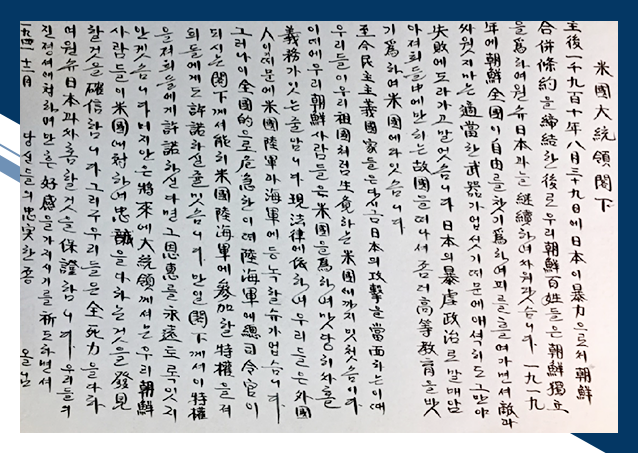 사진Photo 2. The letter by Korean Students Association in the US requesting permission from President Roosevelt to join the US military (Source: The Princeton University Archives)

It seems that Swann provided active support for Chung’s involvement in the independence movement. In March 1942, Swann wrote to the editor of The New York Times to appeal for the need for increased public attention on Korean independence and to request them to hold an interview with Chung and publish a contribution by Chung in the newspaper’s Sunday edition. However, Lester Markel, the newspaper’s renowned editor, declined her request. In the same month, Syngman Rhee, then the Chairman of the Korean Commission in the United States, sent a thank-you letter to Chung. In the letter, Rhee told him that Channing Liem, who later served as the South Korean delegate to the United Nations, recommended he be included as a member of the Korean-American Council. Rhee also promised support for The Free Korea, a serial Chung was publishing. Syngman Rhee (Political Science, 1910), Kei Won Chung (Oriental Studies, 1938), and Channing Liem (Political Science, 1946) are all Princeton alumni. Another important source of information about Kei Won Chung is The Free Korea. Since The Free Korea was published while he was working at the East Asian Library, all the issues from Volume 1, Issue 1 to Volume 3, Issue 2 are stored at the library. This English-language serial featured articles on Korean independence and a wide range of subjects on Korea, including its culture and history. The articles were contributed by both Koreans and non-Koreans. According to The Free Korea and other documents including the list of executive committee members of the Korean Students Association, Chung served as the Chair of the Korean Students Association in North America. Swann was supportive of Chung’s activities to the degree that she served as an advisor to the Association. Chung’s activities continued until he was recruited by the OSS two years later as a translator of Asian-language documents. He had planned to return to the library once his work was completed at the OSS, but he moved to Korea when the country regained its independence. Immediately after the independence of Korea in 1945, Swann wrote to Chung to ask if he could finish up the Manchu, Mongolian, and Tibetan-language catalogues. In 1947, a letter came from a company asking Swann about the whereabouts of Chung in Korea. Swann replied that she did not know. 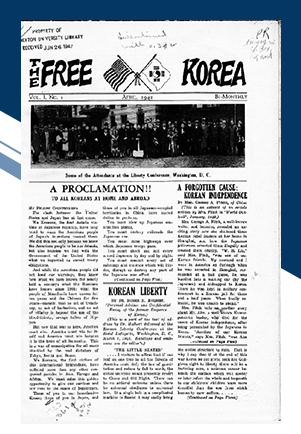 Although I have become the first official Korean Studies librarian at Princeton, as I mentioned previously, there were people before me who worked hard to create and maintain Princeton’s Korean collection. This effort began with Kei Won Chung. He selected Korean books for the university library, catalogued materials in Asian languages, and made great efforts to found a Korean collection at Princeton. He made a trip to examine materials held in other university libraries and worked to gain donations of Korean books. Furthermore, he was actively involved in the independence movement by organizing Korean students in the US. During the Pacific War, he participated in the war effort by working for the OSS. His official title was Director’s Assistant at the Gest Library of Princeton University. However, the documents stored at the University Archives demonstrate that the nature of his work at the library was basically the same as that of a Korean Studies librarian. In this regard, suffice it to say that Dr. Kei Won Chung was fundamentally the first Korean Studies librarian at the East Asian Library of Princeton University.

Next
The Understanding Korea Project