The Korean Studies Collection at the University of Washington

The Korean Studies Collection at the University of Washington

The University of Washington maintains one of the oldest Korean Studies programs in North America. A Korean language program was introduced in 1944 to provide language training to American service people during World War II. It eventually grew into a full-blown Korean Studies program. Currently, the program includes research on history and language and also on literature, politics, and anthropology.

The Tateuchi East Asia Library (TEAL) was established with a goal to support professors and students in Asian Languages and Literature and in the China, Japan, and Korea Studies programs within the Jackson School of International Studies. It was originally called the Far Eastern Library upon the establishment of the Far Eastern Institute but was renamed the East Asia Library when it relocated to Gowen Hall. As one of the top ten East Asia libraries in North America, TEAL houses over 800,000 books. With the Suzzallo and Allen Libraries collecting subject area materials in English and Western European languages, the East Asia Library focuses its acquisition activities on humanities and social sciences materials in Chinese, Japanese, and Korean languages. TEAL also has East Asia materials in Tibetan, Manchurian, and Mongolian. 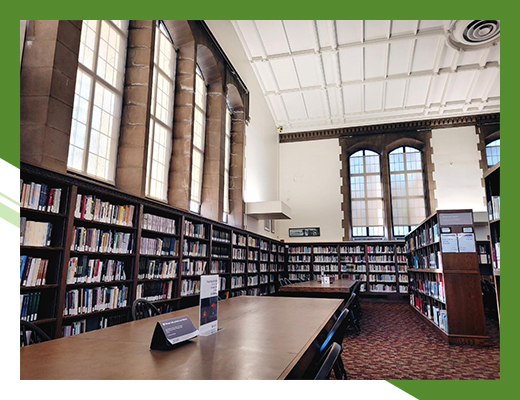 Photo 1. A reading room at TEAL

The Korean Studies Collection at TEAL, which started with just a handful of books donated by Korean students in the early 1940s, is now the third-largest among Korean Studies collections at university libraries in North America.1 Most particularly notable are the James B. Palais Collection, Liberation Space Collection, and Manhwa: Korean Graphic Novels collection.

The James B. Palais Collection consists of over 10,000 books and research papers donated by Professor James B. Palais, who greatly influenced the development of UW Korea Studies. The collection includes a translation of Bangyesurok, which was written by Yu Hyeong-won during the Joseon Dynasty (at over 2,000 pages, it is Professor Palais’s major research achievement); research papers on the South Korean human rights movements; and letters exchanged between former President Kim Dae-jung and Professor Bruce Cumings. Among the donated items, the English materials are housed at the Suzzallo and Allen Libraries and the manuscript copy of the translation has been fully digitized.

The Liberation Space Collection comprises materials published after the independence of Korea in 1945 but before the Korean War in 1950, including 104 titles of Korean books. There are poetry volumes, novels, books on the history of literature and critical reviews, and children’s books. All of these books have been made available for use and permanent preservation through digitization.

The Manhwa Collection consists of over 15,000 Korean graphic novels donated by an antique dealer in the state of Washington. Although the process of receiving the donation was difficult at first due to preconceptions on the part of the university library about the value of graphic novels, it is now highly regarded as important materials for research on Korean popular culture. The graphic novels were published between the 1980s and early 2000s and include the works of popular Korean graphic novelists including Huh Young-man and Hwang Mina. The front covers of over 1,000 books have been scanned and are retrievable on the library database.

The Korean Studies collection at TEAL contains about 146,000 items, including books, periodicals, and e-books in Korean and other languages. TEAL continues to acquire high-quality materials in both paper and electronic formats through the National Library of Korea’s support program for overseas Korean Studies institutions, as well as the Korea Foundation’s Korean Studies support program. As one of the participating institutions in the Korean Collection Consortium of North America (KCCNA),2 which was created in the mid-1990s, TEAL has also been collecting a wide range of materials, including on women’s studies, modern poetry, Gyeongsang-do Province, tourism, and children’s books. Materials related to women’s studies have been gradually expanded to include family and gender studies, while materials on regions are concentrated on Dok-do Island. 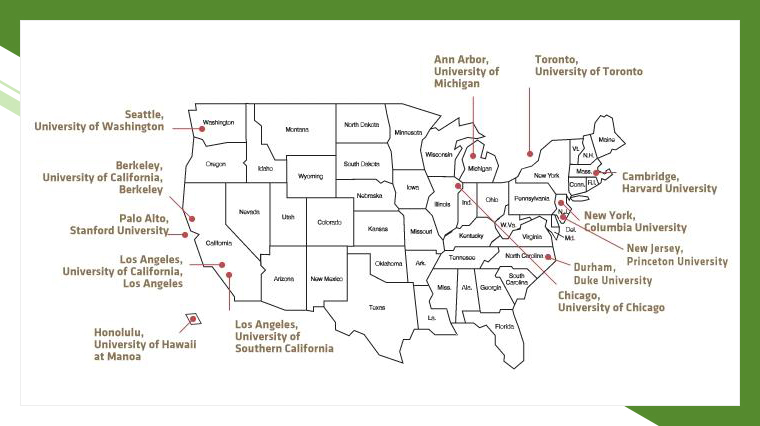 Due to the Covid-19 pandemic, TEAL is increasingly considering the acquisition of additional electronic materials. HathiTrust,3 a collaborative repository of digital content, temporarily offered free access to scanned copies of its printed materials. Given the popularity of this service, the Korean Studies section at TEAL has increased its acquisition of Korean e-books. However, TEAL is facing obstacles due to the limitations of e-book platforms and the library’s budget limitations.

There are also Korean books that are housed only at TEAL. Librarian Yi Hyokyoung, who has worked at TEAL for over two decades, found treasures that had been hidden in a corner of the library and wrote about them in Korean Books at the University of Washington (워싱턴 대학의 한국 책들, in Korean).4 This book sheds light on 44 books published between 1900 and 1945. This period is noteworthy in the history of Korea because more books were being published than ever before despite the Japanese colonial government’s suppression of freedom of the press. The stories on each of the 44 books introduced in Yi’s book show both their literary value and the changing trends of publication during the period. 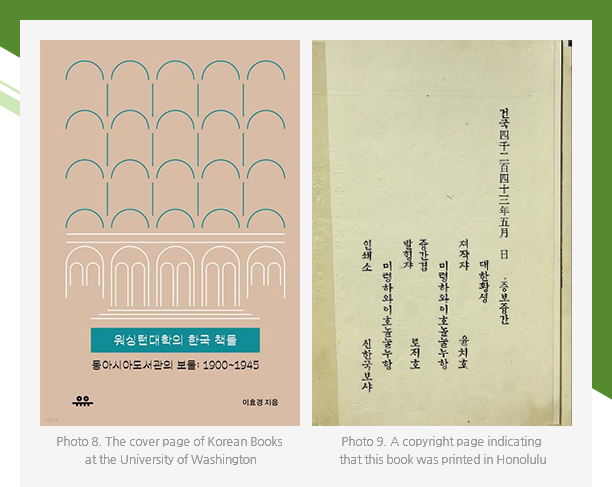 If you flip through the pages of the book, your eye may be caught by the name Honolulu and you may wonder why the book was published there. Considering that Honolulu is a port in Hawaii, however, you can understand. You will also find familiar names such as Shanghai, Manchuria, and San Francisco in these books. From these places of publication, we can gain information on some of the difficulties and obstacles Koreans faced in order to publish books in Korean under Japanese rule.

Another interesting thing is that even in a translation of a foreign children’s book, it can be seen that the translator has certain intention that he or she wants to deliver. A strong will to express one’s own opinions and disseminate knowledge during this period in Korean history was probably one of the factors that led to the flourishing of publication. Due to the characteristics of the period, however, the literary value and critical opinions within a book were often greatly influenced by the perspective of the author or the translator. Arguably, this can be considered a point where the specificity of the period greatly affected the history of Korea’s publishing industry.

The stories in Yi’s book are divided by decade, and by the decade is roughly when Japanese colonial policies were changed. The structure of the book therefore concisely illustrates the changing scenery in publishing in Korea set against its historical background. While this book was written to introduce the Korean collection at TEAL, it can provide a useful resource for research on the history of publishing in Korea.

2The KCCNA (https://kccna.libguides.com/home) was established in the mid-1990s by six North America universities, including the University of Washington, in cooperation with the Korea Foundation. A total of 14 institutions are now participating in the consortium. Each institution has specialized subject areas for which it has systematically developed collections over the past 26 years. This consortium has been praised as a future-oriented library project model.