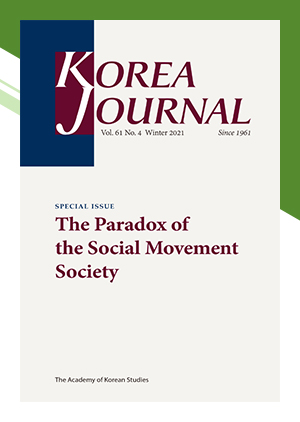 The Academy of Korean Studies announced the publication of the 2021 Winter Edition of the Korea Journal, which features articles examining the past and present of social movements in South Korea, including the LGBTQ rights, labor, and feminist movements. It reflects on their future directions in rapidly changing environment.

“Demonstrations have been a part of South Korean culture since the collapse of the dictatorship in 1987,” said one foreign correspondent. Notably, the weekly candlelight vigils that were held in Seoul and the provinces in October 2016 brought about the impeachment of an incumbent president in March 2017. The annual Pride festival, which has been held in Seoul Plaza in recent years, has developed into a yearly confrontation between LGBTQ groups and right-wing Christian organizations.

Aiming to explore the characteristics of the diverse social movements within South Korea, the AKS has published this edition comprised of articles that provide in-depth analyses of controversial issues in South Korea.

In Queer Protest! Solidarity and the Formation of Minority Politics in South Korea, Dr. Yeong Ran Kim, Digital Media Fellow at Sarah Lawrence College explores some of the important historic moments in South Korea’s LGBTQ+ rights movement since the 1990s.

Against the backdrop of the enactment of an anti-discrimination law, something promised by the Roh Moo-hyun government but still caught up in a legislative stalemate, Dr. Kim reviews the vision of a new society and the future that queer activists have presented over the past 30 years and examines some of the critical moments in South Korea’s LGBTQ+ history.

In Labor Movements in Neoliberal Korea: Organizing Precarious Workers and Inventing New Repertoires of Contention, Dr. Yoonkyung Lee, Associate Professor at the Department of Sociology at Toronto University, reviews the changes observed in South Korea’s labor market over the past two decades. In this paper, Dr. Lee analyzes the organization and strategies that South Korean workers have used in the face of job insecurity, labor instability, and discrimination in the labor market.

The Resurgence and Popularization of Feminism in South Korea: Key Issues and Challenges for Contemporary Feminist Activism by Dr. Jinsook Kim, Postdoctoral Fellow at the Center for Advanced Research in Global Communication at the University of Pennsylvania, explores the resurgence and popularization of the feminist movement in the years since 2015 set against the backdrop of South Korea’s historical, social, and political contexts. She also reflects upon the spread of the feminist movement through digital media, as well as the related agenda.

In Vacillating between the Cold War and the Culture War: The Contemporary Predicament of the Korean Evangelical Right, Professor Seo Myeong-sam at the Department of Christian Studies at Ewha Womans University traces back the modern history of conservative Christian participation in right-wing politics in South Korea. Since the early 2000s, conservative Christian groups have been at the forefront of right-wing social movements in South Korea under the paradigm of a pro-America and anti-communist cold war ideology. Over the past two decades, they have expanded and promoted an exclusionist culture that alienates Muslims and sexual minorities. Focusing on how religion and politics have converged and how this convergence has changed, Professor Seo examines how conservative Christians in South Korea perform a precarious balancing act at the locus where the cold war ideology and cultural war converge and separate.

Finally, Co-governance and the Environmental Movement by Dr. Kim Seon-cheol, an independent researcher and climate justice activist, traces the changes experienced within the environment movement in South Korea.

Each issue of the Korea Journal focuses on a special topic worthy of attention in contemporary South Korean society, and this practice will continue in 2022.

The full text of the 2021 winter issue can be found at: www.aks.ac.kr → Publication and materials → The Korea Journal.