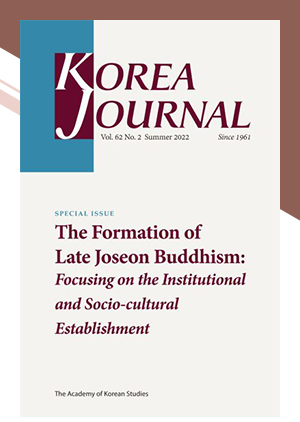 Photo. The cover page of the 2022 Summer Issue of Korea Journal

□ The Academy of Korean Studies (President Ahn Byung Woo) announced the publication of the Summer Issue of Korea Journal, which features the formative process of late-Joseon Buddhism with a focus on its institutional and socio-cultural establishment.

□ The Summer Issue was planned with special consideration of the IABS congress being held August 15 to 19 at Seoul National University. Professor Kim Seong-eun of the Korean Buddhist Research Institute at Dongguk University specially participated in the planning of the issue.

○ This issue was distributed to about 500 domestic and international Buddhist Studies researchers who attended the IABS congress.

※ Korea Journal was introduced in September 1961 as the first English-language Korean Studies academic journal published in South Korea. As a quarterly journal, it publishes recent research outcomes from across the Korean Studies field. It has been indexed in the reputable Arts and Humanities Citation Index (A&HCI) since 2001.

□ In the Establishment of Buddhist Cultivation Centers in Late Joseon Korea, Professor Lee Jong-su of Sunchon National University examined the background behind the establishment of lecture halls, meditation halls, and chanting halls as Buddhist cultivation centers in the late-Joseon era when there were no more government-sanctioned Buddhist activities, as well as the process of their establishment and the implications within the overall history of Buddhism in Korea.

○ Following the Japanese Invasions of Korea, Korean Buddhism was unified into Imje Jong, a branch of the Seon (Zen) school. It integrated both doctrinal learning and training methods. As a result, the practices of the three gates, gyeongjeol-mun (meditation), wondon-mun (doctrinal study), and yeombul-mun (chanting), became popularized.

○ According to the author, it became common for monks to continue their practice in meditation halls or chanting halls after graduating from lecture halls, and this planted seeds for later debates on meditation and the nature of mind.

□ The Role of the Laity in Rebuilding Buddhist Devotional and Material Culture in the Late-Joseon Period by Lee Seunghye, Curator at the Leeum Museum of Art, examines how the Buddhist monastic community reached out to the laity in order to ensure its institutional survival and how the active participation of lay devotees changed Buddhist culture.

○ This paper sheds light on the roles of lay devotees in the revitalization of Buddhism in late 19th century Korea and what lay devotees of varied social standing and motivations gained as a result of their patronage.

○ Despite the difficulties they faced in Confucian society, male lay devotees from the jungin class and female court members found a place of their own in the Bogwangsa Temple monastery.

□ The Restoration and Legitimacy of the Bhikṣu Precept Lineages in the Late Joseon Era by Assistant Professor Lee Jarang at Dongguk University (Academy of Buddhist Studies) examines the restoration of the Bhiksu precept lineages in 19th-century Joseon Buddhism, as well as the historical and religious backgrounds of why some monks, including Manha Seungnim, chose to travel to China for ordination in the late 19th century even though Daeeun Nango had reinitiated full ordination and formed a precept lineage in the early 19th century.

○ The author argues that the seosang sugye ordination method was not accepted as a legitimate Bhiksu ordination method; that it is likely that Daeeun’s lineage had been accepted by the mid- to late 19th century, causing a controversy over its legitimacy; and that the Sino-Korean regulations on land and sea commerce introduced in the late 19th century caused exchanges between the two countries to grow more active.

□ The 2022 Summer Issue can be found at www.aks.ac.kr (Go to Publications and then to Korea Journal). 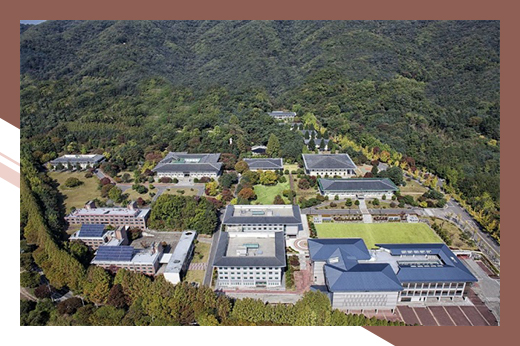 The Academy of Korean Studies is a government-funded research institute under the Ministry of Education that is mandated with conducting in-depth research and education on Korean Studies.

As the home of the Jangseogak Archives, which houses a number of national treasures including Uigwe of the Joseon Dynasty and Dongeuibogam, the AKS carries out a wide range of projects, such as Korean Studies research projects, the Understanding Korea Project, and the Korean Studies Content Publication Project, as well as operating the Graduate School of Korean Studies.

It is located in Unjung-dong, Bundang-gu, Gyeonggi-do, South Korea.

Next
Leaping towards being a culturally influential country: The Third Framework Plan to Promote Periodicals (2022-2026)