Publication of K-Culture: 50 years of overseas promotion of the Republic of Korea

Publication of K-Culture: 50 years of overseas promotion of the Republic of Korea

- Published in celebration of KOCIS’s 50th anniversary, K-Culture details the history of KOCIS’s promotional efforts from 1971 to 2021. -

In celebration of its 50th anniversary, the Korean Culture and Information Service (KOCIS, Director Park Jung-youl) under the Ministry of Culture, Sports, and Tourism (Minister Hwang Hee) is slated to publish K-Culture: 50 Years of Overseas Promotion of the Republic of Korea in December 2021. This is the first book published by a government ministry to detail the government’s efforts to promote the country on the international stage.

K-Culture includes stories from KOCIS that are not widely known to the public despite its long history of service from 1971 to 2021, including the roles and mandate of KOCIS and anecdotal experiences of KOCIS members who were at the forefront of the efforts to globally promote Korea.

First, the history of KOCIS has been traced back through interviews with the first-ever Minister of Culture Lee O-young and the first Minister of Culture and Tourism during the Roh Mu-hyun administration, Lee Chang-dong. During interviews that lasted far beyond the time originally scheduled, the two cultural leaders emphasized the importance of promoting Korea on the global stage and of the kind of work in which KOCIS will need to engage.

The book also describes the activities of the 33 Korean Cultural Centers in 28 countries and nine Culture and Information Officers working in cooperation with other related ministries as they laid the foundation for what became the “Korean Wave.”. “50 proud KOCIS moments,” which were selected by KOCIS members, includes the 2020 K-pop Contest in Central and South America, which is considered a monumental event in the promotion of K-pop, Pope Francis’s visit to South Korea, and the 2018 Inter-Korean Summit. The book also features Letters from Around the World, which were sent by the directors of Korean Cultural Centers in seven countries, and the Never-ending Stories of Overseas Promotion written by eleven former KOCIS members who are currently retired from the forefront of overseas promotion efforts but whose hearts still remain tied to KOCIS and the world. In addition, readers will not want to miss the stories about the various items cherished by KOCIS members.

A set of goods that represent the book, K-Culture, and the items cherished by KOCIS members on their global travels will be made available for sale: online reservations for purchase start on December 3 and the official sale opens on December 10 both online and offline at major booksellers.

K-Culture is made in the form of a ‘book box’ that resembles a briefcase that KOCIS members might have carried around the world. Inside the box are the 224-page book, a limited-edition business card, a KOCIS member fridge magnet, and a 100% biodegradable ballpoint pen made from sugarcane.

K-Culture can be reserved for purchase beginning on December 3 at major online booksellers and will be released for sale on December 10 through major online and offline bookstores, including Kyobo Bookstore, Yes 24, Aladdin, and Young Poong Bookstore. The cost is 18,000 won, and all proceeds will go to the national treasury.

“This book is the record of the sweat and passion of KOCIS members who, for the past 50 years, have never stopped believing in the power of Korean culture and continuously strived to make it global,” said Director Park Jung-youl. “KOCIS is a door through which we proudly present Korea as it is. We, as KOCIS members, will continue to work hard to make the Korean Wave more fully enjoyed by people around the world.”

The contents of the K-Culture: 50 Years of Overseas Promotion of the Republic of Korea 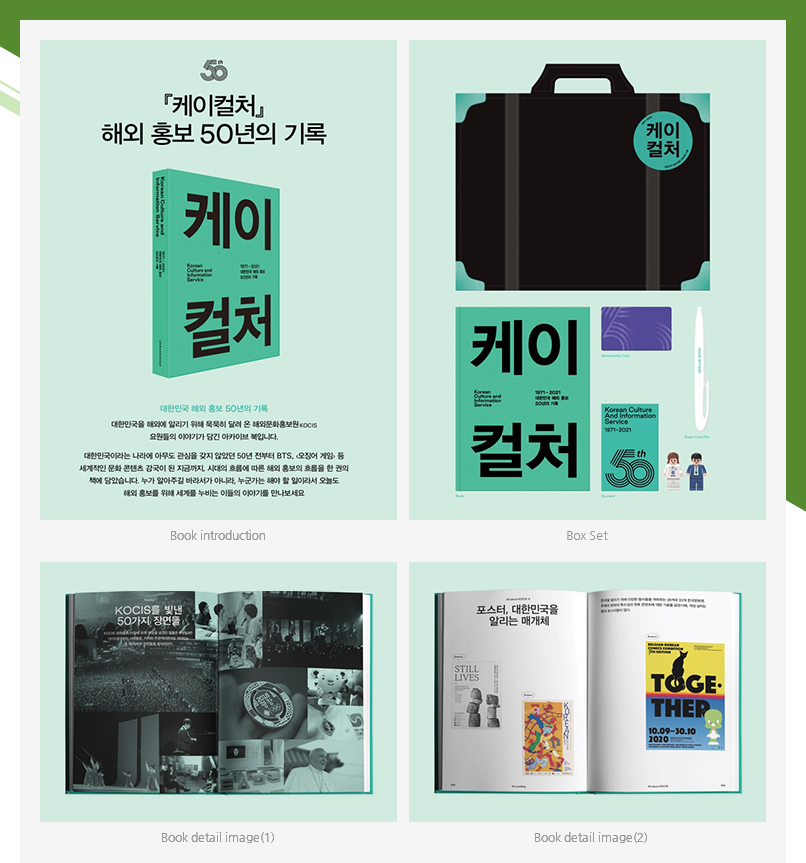 Photo. K-Culture: 50 Years of Overseas Promotion of the Republic of Korea

Prev
Books are the foundation of advanced culture