A branch of the King Sejong Institute, a global Korean language teaching institution, has recently been opened in the Republic of South Africa. 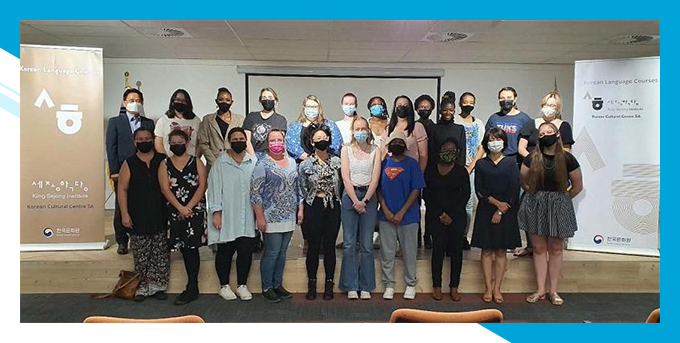 The Korean Culture Centre in Pretoria, the capital of the country, opened a King Sejong Institute branch on March 28, 2022 and began teaching Korean language and culture classes to 30 students. All 30 students are local residents.

This 16-week course will be operated as a pilot program. The students were selected on a first-come-first-served basis as demand surpassed the capacity. Among the students are a mother (Ureta, 49) and her two daughters (Stephanie, 11, and Yana, 22).

Melody Zondo (43), who represented South Africa at Mrs. Universe 2020/21, is also enrolled as a student. Mrs. Universe is a beauty contest for married women that was first organized in Sofia, Bulgaria, in 2007.

“I’m going to participate in the Mrs. Universe International competition that is to be held in Seoul in June. There will be 110 Mrs. Universes from around the world. I decided to attend this course because I want to communicate with Koreans and Korea,” said Zondo in an interview with Yonhap News Agency. Zondo lives in Johannesburg, which is about an hour by car from Pretoria. “I think learning the language is the best way to really dive into the local culture and express yourself. I’ll embrace Korean culture by learning hangeul.”

Including the new branch in South Africa, there are now 13 King Sejong Institutes in Africa.