(In order to serve the needs of our Korean readership, we have modified parts of the original English media release published by the IFLA.)

The IFLA has published the 2021 update to its Trend Report. The Trend Report was launched in 2013 and is based on ideas submitted by professionals and different sectors of the library community in an effort to inspire and support reflection on the future of the community. The Trend Report identifies opportunities and challenges and how they can best be used by the IFLA and by library associations, libraries, and library and information science professionals around the world 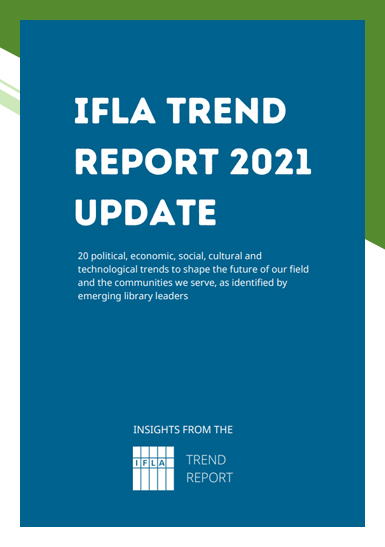 Beginning with a foreword by IFLA President Barbara Lison and an introduction by Secretary General Gerald Leitner, the IFLA Trend Report 2021 Update explores major issues and insights regarding the operation and development of libraries.

The Update focuses on the ideas shared by emerging library leaders from around the world that provided the foundations for the President-elect’s session at the World Library and Information Congress.

The Update shares 20 different suggested trends – some complementary, some contradictory – that the people who will be leading our field in ten years felt would mark their professional lives. For each one, a short section highlights key questions and aspects, as well as potential responses for the library field. The trends are