인쇄
/ 한국 Passing on the spirit of the Odaesan National History Archives, the NLK Data Preservation Center is set to open in Pyeongchang in 2024
Character size 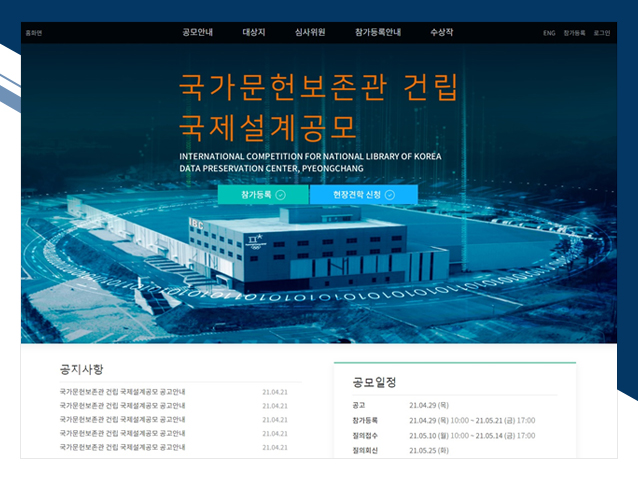 Photo. The official website for the International Competition for the National Library of Korea Data Preservation Center Design

▲ An Olympic facility reborn as a ceter of knowledge.

The NLK is planning to convert the International Broadcast Center, a legacy of the 2018 Pyeongchang Winter Olympics, into a Data Preservation Center. To achieve this, it signed business agreements with the Gangwon-do Provincial Government and the PyeongChang Organizing Committee for the 2018 Olympic & Paralympic Winter Games. The project passed its KDI preliminary feasibility study last November and is scheduled to be completed in 2023. It is expected to cost a total of 61 billion won (55 million US dollars). It is estimated that over 100 billion won (90 million US dollars) will be saved by recycling the existing facility rather than attempting new construction. The center will have a floor areas of37,246㎡on a site of 145,297㎡. It is expected that the center will be housing nearly 14 million items within 30 years.

▲ The competition is open to both domestic and overseas architects.

The competition is open to both domestic and overseas architects. Overseas architects are required to partner with a domestic architectural office, however. The design should take into account the symbolic implications of being the first national data preservation center in South Korea, the characteristics of the region (Gangwon-do and specifically Pyeongchang), and its function as a preservation center storing data by media format. It should also provide stability and safety regarding the adaptive re-use of existing facility.

Applicant registration via the competition website (www.nlpc-compe.org) was completed at 5 pm on May 21, and applicants are required to submit their designs by 5 pm on July 27. The winners of the competition will be announced on the website on August 5.

The jury consists of five jurors selected based on recommendations from major industry and academic architecture associations and after deliberation by the competition organizing committee. The winner of the competition will be granted the right to sign agreements on concept and construction design. Four runners-up will receive between 10 and 50 million won (about 9,000 to 45,000 dollars).

We are constructing not just a building but a pillar of South Korean culture.

“Situated near to the Odaesan National History Archives, the location of the Data Preservation Center in Pyeongchang bears historical significance. With its state-of-the-art preservation and restoration system, the center will become a space for remembering people’s lives and preserving national information by permanently conserving national documents,” said the National Library of Korea.

Prev
Take a trip to the library of the future

Next
The NLK distributed a pandemic response manual for libraries