As the flagship library of South Korea, the National Library of Korea (NLK) has been striving to produce high-quality bibliographic records. Equally important as the quality of records, however, is expanding access to them since they have little value without proper discovery and utilization. The NLK fully understands its grave responsibility as the legal deposit library of South Korea to create an environment in which the nation’s bibliographic databases can be easily found and accessed by people around the world. As part of this mission, the library is striving to increase global access to its bibliographic records. This paper presents an overview of the NLK’s bibliographic data globalization project.

The NLK began reflecting upon how to expand international access to South Korea’s bibliographic data in the mid-2000s. With the country’s heightening international status and the Korean Wave spreading from Asia to all parts of the world, there has been an increase in interest in Korean culture. As a consequence, the demand for bibliographic records has grown among Korean Studies scholars and other interested overseas users. This has prompted the NLK to seek ways to promote Korean resources and better fulfil the needs of users around the world. One of the related strategies has been providing bibliographic records to WorldCat, the world’s largest catalog, which is operated by the Online Computer Library Center (OCLC). The NLK entered discussions with the OCLC in 2015 regarding a timeline for transfers, how to convert and transfer data, and other matters. It signed an agreement with the OCLC in 2016 on the transfer of a total of 1.5 million bibliographic records over the five years from 2016 to 2020. The NLK batch loaded records once per year after converting them to the MARC 21 format.

Bibliographic records provided to the OCLC

The data transformation required for providing bibliographic records to other organizations costs time and money. In order to maximize the effects of the data transfer, it was necessary to establish guidelines on how to prioritize the records to be transferred. At the time it decided to send bibliographic records to WorldCat in 2015, the library was home to over 10 million items, including domestic books, foreign books, old books, and non-book items, as well as over 4.3 million MARC bibliographic records. It had to decide which records would be internationally preferable while not overlapping with the contributions of other organizations. It was also important to consider which records would best meet the needs of users. As a result, the following guidelines were established (Table 1).

Table 1. Guidelines on the selection of records to be transferred

Domestic librarians can fully understand and create records for materials published in Korean, which would prove useful to overseas users and Korean Studies researchers.

Providing records on digital materials was considered, but it was found to be difficult to transfer them to WorldCat without converting the MODS format.1 Currently, only those records in MARC are being provided.

Unlike WorldCat, which uses MARC 21 for its bibliographic records, the NLK uses KORMARC, a local Korean standard. In order to offer South Korean bibliographic records to WorldCat, the library has to convert its records to the MARC 21 format. The library created rules for conversion between KORMARC and MARC 21, based on which it developed and integrated a KORMARC-to-MARC 21 conversion function in its Integrated library system in 2016. Thanks to this, the library can now convert its records to MARC 21 as needed.

Since KORMARC is a modified version of MARC 21 created to meet the needs arising in a South Korean context, many fields are either identical or highly similar between the two formats, but some have distinctive indicators and subfield codes customized to the domestic environment. Figure 1 shows an example of record conversion from KORMARC to MARC 21. 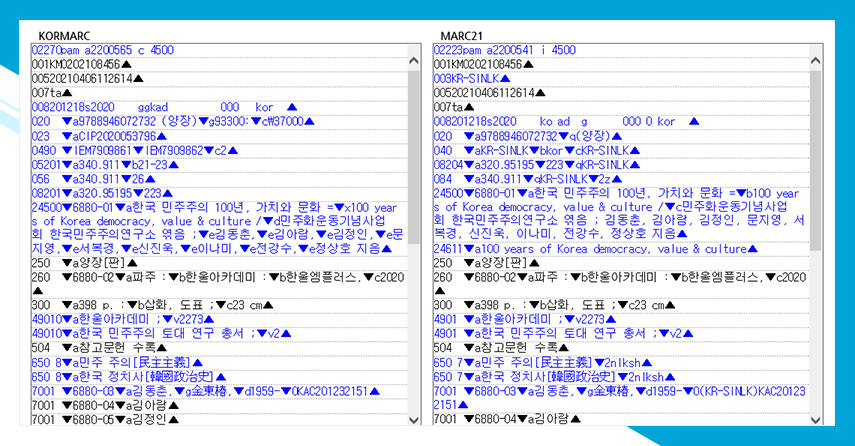 Figure 1. Comparison of records between KORMARC and MARC 21

As seen in this example, one major difference is found in the description of field 245 (Title Statement). Here, MARC 21 describes in subfield ▾b all the remainder of titles, including parallel titles, while KORMARC describes parallel titles in subfield ▾x. In addition, MARC 21 uses subfield ▾c just once to describe all the relevant statements of responsibility while KORMARC describes the first statement of responsibility in ▾d and then repeats ▾e to present any remaining statements of responsibility. These differences are due to the fact that MARC 21 uses field 245 for the purpose of display and provides description in field 246 (Varying Form of Title) when an access point is needed, while KORMARC is designed so that field 245 has both title access points and functions to facilitate field 7xx (added entry) description.

The NLK provides major search access points in the Roman alphabet, including title, author, and publication data, for the convenience of non-Korean users. Table 2 shows the list of fields subject to Romanization.

Table 2. The list of fields provided in the Roman alphabet

The Romanization follows the National Library of Korea Romanization Rules for Bibliographic Records, which was created based on the Standard Romanization of the Korean Language established by the national government.

Table 3 shows an example of the South Korean government’s official . For the convenience of comparison, non-essential parts were removed and the order of the fields were reorganized. For more information about the conversion rules, see the NLK Romanization Rules for Bibliographic Records.2

Method and status of data transfer

The NLK transfers its bibliographic records to the OCLC once per year using the batch load method. At the OCLC, the received records are processed and uploaded to WorldCat for access by librarians and other users around the world.

In accordance with the initial agreement, the library sent the OCLC about 300,000 records per year, reaching a total of 1.5 million records from 2016 to 2020. In the end, all the records classified as priorities for transfer by 2020 were sent. With the first five-year agreement completed, a new agreement was reached in 2021 for the transfer of additional records. According to this new program, the library will send 70,000 new records per year from 2021 to 2025.

By 2021, the library had provided about 1.57 million records to the OCLC. As of December 2021, WorldCat services some 2.7 million Korean bibliographic records, 58% of which are from the NLK.

This paper discussed the National Library of Korea’s efforts to globalize South Korean bibliographic data, including through cooperation with WorldCat and the provision of Romanized search access points. While these efforts have helped expand the opportunities for non-Korean users and Korean Studies scholars to access high-quality bibliographic records from the country, limitations have also been encountered.

First, the records are transferred to WorldCat once per year via batch load. As a result, some records are uploaded as late as a year after they were created. When certain records are modified or deleted, the changes are not automatically updated. In order to address these limitations, the library is working to allow users to access and download MARC 21 records from the library’s main website as well and to shorten the intervals between record creation and provision. Furthermore, the library is planning to develop and release an API (Application Programming Interface) that enables bulk searching and downloads

Second, the records offered to WorldCat are limited to physical materials in MARC format. However, a growing number of materials are being digitized or are born digital. For open-access materials, it is possible that they can be directly accessed upon discovery. Provision of bibliographic records for online materials will improve the access to more diverse Korean resources by non-Korean users. In this regard, the library will need to reflect upon how it can expand its records provision service to include online materials.

The National Library of Korea will continuously improve its efforts to globalize Korea’s bibliographic data by addressing the pertinent challenges and expanding access. The library invites feedback and advice from Korean Studies librarians on these efforts.

2The NLK Romanization Rules for Bibliographic Records can be viewed on the NLK’s Librarian Support Services website
(https://librarian.nl.go.kr/LI/contents/L101000000000.do)